GraphiteTIM: Optimizing the thermal path for your power module

How do you feel about this article? Help us to provide better content for you.

Thank you! Your feedback has been received.

There was a problem submitting your feedback, please try again later.

What do you think of this article?

Everyone knows that heat is a system killer. A rough rule of thumb that is generally accepted is that for every 10 degrees Centigrade rise in temperature, the average reliability is decreased by 50 percent. To look at it from another angle, the MTBF (meantime between failure) will, on average, double if the operating temperature is lowered by 10 degrees C. Yet technological advances and commercial demands continuously work against the design engineer wanting to keep the heat down. Processors run at higher and higher speeds – in the home computer world, overclocking is common, exacerbating this trend. Consumer devices such as mobile phones are getting more power hungry as functionality increases at a hyperbolic rate, and battery life, amongst those who suffer from nomophobia – the fear of not being connected (no-mobile-phone-phobia) – increases, yet the phone chargers and adapters must, say the marketeers, be sleek and low profile. Perhaps one of the most severe thermal management challenges concerns the increasing use of IGBTs and SiC MOSFET power modules for all sorts of applications – automotive, renewables, and traction to name just a few – where system performance and efficiency are critical, and derating to allow for elevated operating temperatures is far from ideal.

All this – as we have said - is well known. Good design will see sensitive or heat-producing components or system elements mounted on, or close by, cold walls with good access to adequate cooling in the form of heatsinks and fans. Unfortunately, this is where ‘real life’ gets in the way – many factors can mean that the thermal path is not efficient – what’s more, even if the path is optimal when the device is new, it can degrade such that eventually, the process of removing heat becomes ineffective. This article looks at a variety of ways to achieve good interfacing between the heat source and cold wall, focusing on solutions for power modules, including a new material that solves many of the challenges faced by design and production engineers.

When cooling heat-generating components using heatsinks, gaps can occur between the two adjoining surfaces, resulting in air pockets which increase the thermal resistance such that efficient cooling cannot be achieved. Therefore, these gaps must be filled using a thermal interface material (TIM) with a low thermal resistance.

Several types of TIM exist. Thermal greases have been around for a long time and are the most common and cheapest form of TIM. They are applied between heating elements and heat sinks. However, it is difficult to apply them evenly and repeatably, and there is also an issue of long-term reliability since they can dry out and lose efficacy.

Phase Change Materials (PCM) soften at high temperatures and can be placed between heating elements and heatsinks. They feature reduced contact thermal resistance due to improved adhesion caused by the softening at high temperatures. Although they are sheet-like and easy to handle, there are cost issues and the issue of long-term reliability remains.

Thermal conductive sheets are made from a TIM material with excellent thermal conductivity, such as silicon, elastomer and graphite. Sheets are sandwiched between heating elements and heat sinks; they are easy to handle but require pressure to achieve adequate contact.

To save space, more and more power module designs are moving towards ‘vertical design’. With the power module in a vertical position, grease and even PCM is likely to leek out – even before they dry out - leading to a medium to long-term degradation in performance. Therefore, many customers are considering the thermal conductive sheet solution. 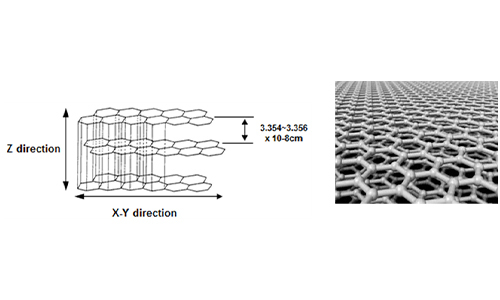 There are three main requirements for TIMs. First, they must have a low thermal resistance. This requires the TIM to have a soft, low density; also pressure must be applied to achieve adequate contact, to allow for any warping or lack of co-planarity between mating surfaces. Second, TIMs must have stable characteristics over the life of the equipment and require no maintenance required. Lastly, they must be easy to attach and remove from the cooler and power module without any significant production investment, and also simple to change in the field.

Pyrolytic highly oriented graphite sheets are made of graphite with a structure that is close to a single crystal and produced from polymeric film using a heat decomposition process. The hexagonal crystal structure of graphite is arranged uniformly in a horizontal 2-D structure as shown in Figure 1.

In applications like general power inverters, solar inverters or EV charging stations that use a power module, thermal grease is usually utilized to fill the voids caused by distortion and roughness of the contacting surface. But grease dries out or seeps and therefore needs replacing. This is a costly exercise since it involved field call-out, equipment disassembly, removal of the old grease, cleaning, the application of new grease and re-assembly. 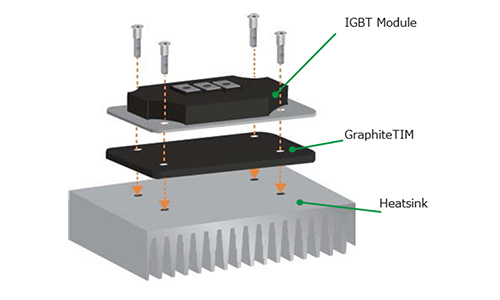 With pyrolytic graphite sheet technology, such as Panasonic’s GraphiteTIM, the sheet has been designed exclusively to act as a thermal conductor, replacing the conventional grease or PCM. Graphite TIM is highly compressible and thus fits well to the uneven surfaces, reducing contact thermal resistance resulting in high heat dissipation, high reliability and easy handling (Figure 2). 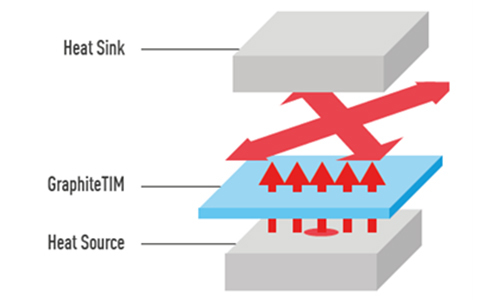 As opposed to other thermal interface materials, GraphiteTIM diffuses heat not only in Z-direction but also across the XY-plane, thereby delivering a much better cooling effect (Figure 3). 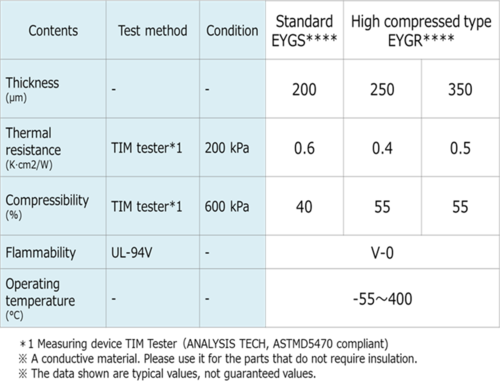 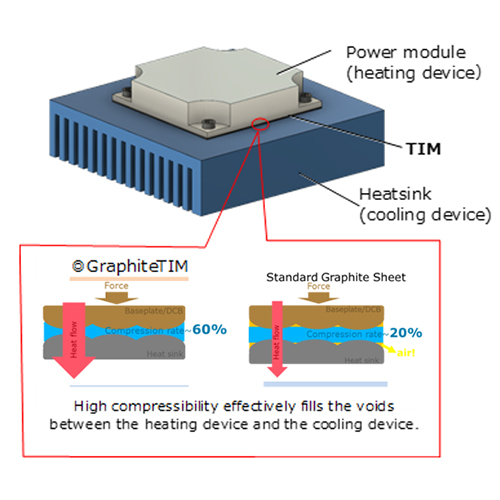 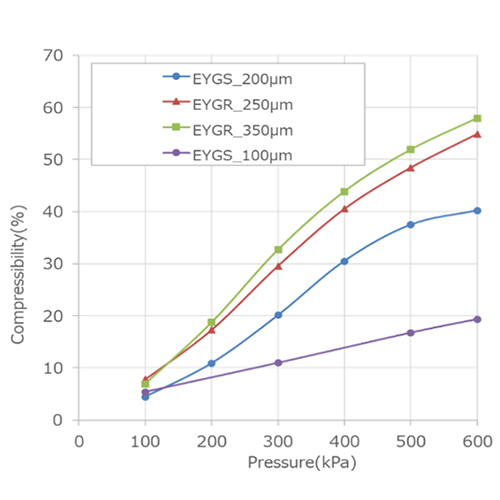 ....and Figure 4b: The compression rates. 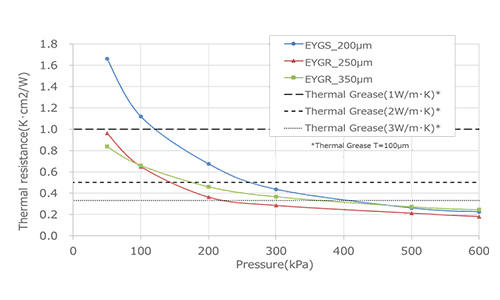 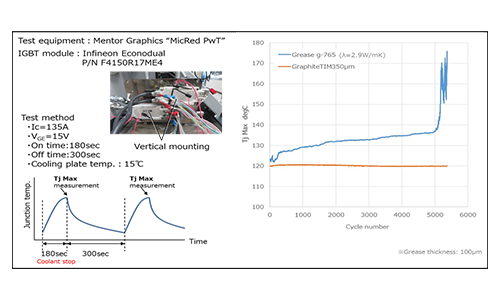 The more reliable the thermal interface material is, the longer the life-time and robustness of the application due to reduced thermal stress on it. Pump-out tests cycling between -40 and above 100 degrees C show that the performance of GraphiteTIM remains constant even after 120 cycles, whereas grease will have lost its efficacy. Similarly, power cycle tests show a very stable performance for the GraphiteTIM sheets, whereas the performance of even high-grade thermal paste/grease shows severe deterioration after 5000 power cycles (Figure 6). 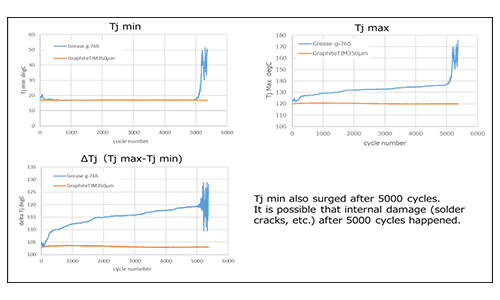 Tj max, Tj min and ΔTj at one glance: 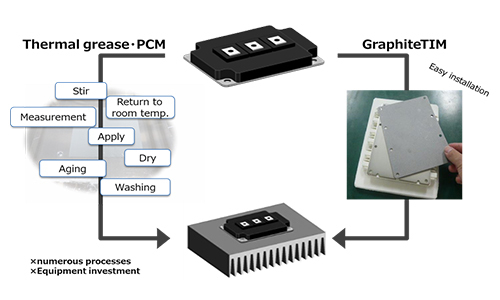 Figure 7 compares the application of thermal greases and PCMs with GraphiteTIM. Essentially it is a repeatable, one-step process to use the sheet, as opposed to a cycle of preparing, applying, drying and cleaning with grease.

The thermal resistance of these sheets is given under different pressures as shown in Figure 8.

Panasonic Industry offers GraphiteTIM in 56 standard shapes that are compatible with various industry-standard power modules including products that match modules from Semikron, Hitachi, Fuji, Infineon and Mitsubishi, as detailed in the GraphiteTIM selector tool at https://industrial.panasonic.com/ww/soft-pgs-cross.

Please also refer to the detailed P/N list in the attached excel file.